Veggie soup recipes don’t have to be boring. This Mexican-inspired soup contains smoky chorizo sausage, zesty tomatillos and fresh veggies. Top it off with cheddar cheese and cilantro.

I don’t usually reach for a salad when I realize that my body is in desperate need of something that grows out of the ground. I tend to be a hot meal kinda gal, so I’m apt to whip out a quick veggie soup recipe. And I think many of us could agree that the vegetable-consuming experience could be exponentially improved by throwing some sausage in the mix.

This Mexican-inspired rainbow veggie soup recipe is anything but bland and boring thanks to smoky chorizo sausage, fresh garlic, sweet bell peppers, savory sauteed red onion and the bright acidity of lime and zesty tomatillos — AKA the fruit that comprises the backbone of salsa verde.

I like to top it all off with sharp cheddar, refreshing cilantro, cherry tomatoes and sharp green onions, and serve it with a stack of crispy corn tortillas lightly fried in a pan or browned in the oven. You could even throw some avocado or a dollop of sour cream on top.

(P.S. Watch my video tutorial for this recipe or keep scrolling to find it below!)

Here’s a big reason why I prefer soup over salad: You get to use up all of those veggies that are past their prime, but still deserve a second chance! Feel free to use this recipe as a blueprint and toss in anything you need to get rid of. Yay for reducing food waste and getting your money’s worth!

Another reason why soup rocks: It’s basically set it and forget it! In this recipe, you’ll brown some of the ingredients before adding in the broth. This step concentrates all those fantastic, umami flavors in the veggies to create a richer, sweeter, more complex flavor.

In this recipe, you’ll first brown the tomatillos before adding the water to give the fruit some color and enhance the sweetness of this tangy fruit. The tomatillos will lend a little flavor to the broth later on.

The flavor profile of tomatillos is a fantastic complement to beef and pork. The brightness of the tomatillos nicely cuts through the fattiness of these proteins and takes them to a new level.

There are two types of Chorizo: Mexican and Spanish. This recipe calls for Mexican. You can find Mexican-style chorizo, which is uncured, in the refrigerated aisle of your grocery store — probably with other types of sausage.

Chorizo is made with beef or pork. Feel free to use whatever you like. I tend to prefer pork. (Speaking of which, if you can’t find chorizo or want to switch it up, I LOVE to make a version of this recipe with chunks of pork shoulder, AKA pork butt!)

If possible, try to get a Mexican-style chorizo that is semi-solid. Many brands sell Mexican-style chorizo in a plastic tube stuffed with mushy meat that has a similar texture to the ground meat that you might buy at the grocery store. A very scientific description, I know. Anyway, I prefer to look for the semi-solid stuff because I love to bite into a chunk of sausage, and the sausage with a softer texture can sometimes disintegrate in a soup after you fry it up. You’ll get the great flavor either way — it just depends on whether you care about having sausage coins in your soup.

To check the texture of your sausage, you can give the tube a little pinch. If it has a lot of give, that’s probably the mushy stuff. I prefer the chorizo that has a little less give, and feels more like a sausage link that you might fry up on Saturday morning.

Take a look at those gorgeous chunks of sausage in this veggie soup recipe below!

The broth of this veggie soup recipe is very simple. It will soak up the flavors of all the veggies inside and the oil from the chorizo will add depth and complexity. The base flavors will be from bullion and lime.

I am a die-hard fan of Better Than Bouillon products (not sponsored, but I wish). I’ve been able to find their paste at every grocery store I’ve shopped at and, in my opinion, the flavor FAR outperforms traditional bouillon cubes. Plus, it’s way more convenient to keep a small jar of Better Than Bouillon paste in your fridge than it is to have several boxes of stock in your pantry.

I like the chicken-flavored bouillon because it’s a nice all-purpose flavor, but you can really use whatever you prefer here. I think veggie or beef bouillon would be fine too. Stock would also work — there are also measurements for stock in the recipe.

I love the flavor of lime, so I like to add the juice of a couple fruits in my soups. You might start with one and see how it tastes before moving on. Lemon would also be great here, if that’s what you’ve got. 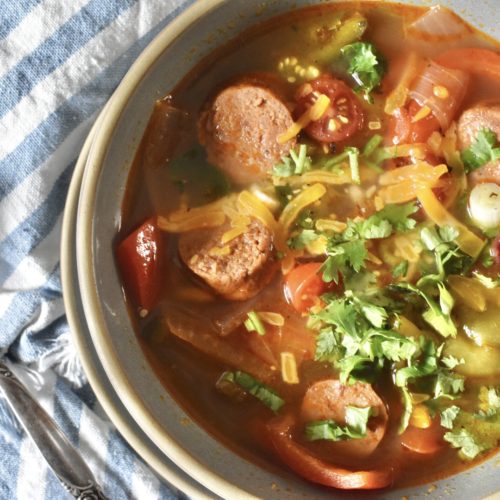 For the broth, pick one: